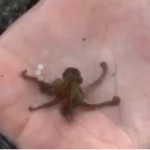 I mean it’s not like this octopus-out-of-water thing is actually anything new. Apparently, according to octopus owners, ventures outside of the tank are not that uncommon of a battle to have with their cephalopod friends.

In fact, rumor has it that if you keep a tank with fish and other yummies in the same room as an octopus and don’t properly close off his tank you’re likely to find him the next day hanging out in an empty fish tank with a full octopus belly.

And it’s fairly common for octopuses to take a quick out-of-water walk to get to a better food gathering tide pool for example.

Still, for us regular non-octopus owning folks seeing an octopus out of water remains all kinds of a novelty.

Case in point…when the internet lost it’s collective hive mind over this little guy taking a seashore walk about.

So I predict this video of a tiny and adorable little octopus out of the water gliding over a man’s hand will cause a little bit of a stir.

Of course I immediately had to wonder if this particular out of water experience was of the little guy’s choosing or if the owner of said hand had snatched him up out of the watery shoreline to show the camera.

I’m guessing the later of the two is the more likely scenario….which I’m cool with as long as he was quickly returned to his watery home.