I suppose I was vaguely aware that some spiders…like many birds, insects, and other arachnids…perform mating dances. But that was as far as my knowledge went. And I’d have been hard-pressed to swear to even that fact.

Then in a happy internet surfing accident I ran across a video of a jumping spider performing his dance. The dance is impressive enough it it’s own right, but this video added an extra…the sound of the dance.

I had absolutely no clue what was going on down there in spider world. There is an entire other layer to those dances consisting of a wide array of sound effects that kind of sound like…well…like that little guy is kick-starting a motorcycle for all it’s worth. And, naturally, his impressive serenade is bound to get any female jumping-spider’s heart thumping.

After watching that first enthralling video I stumbled across the below clip from a PBS show which explained more about what I was watching…and listening to. 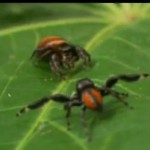 According to researcher Damian Elias, jumping spiders are the peacocks of the arachnid world. He likens their elaborate dances to the fancy footwork of a flamenco dancer. And it’s easy to see why when you watch the perfectly coordinated leg-waving and abdomen-thumping displays.

And although I’m a sap and consequently I felt pretty sad about the prepping of the female spider decoy I must admit I was super-excited to see what Elias was able to capture with his high-speed cam and vibrometer.