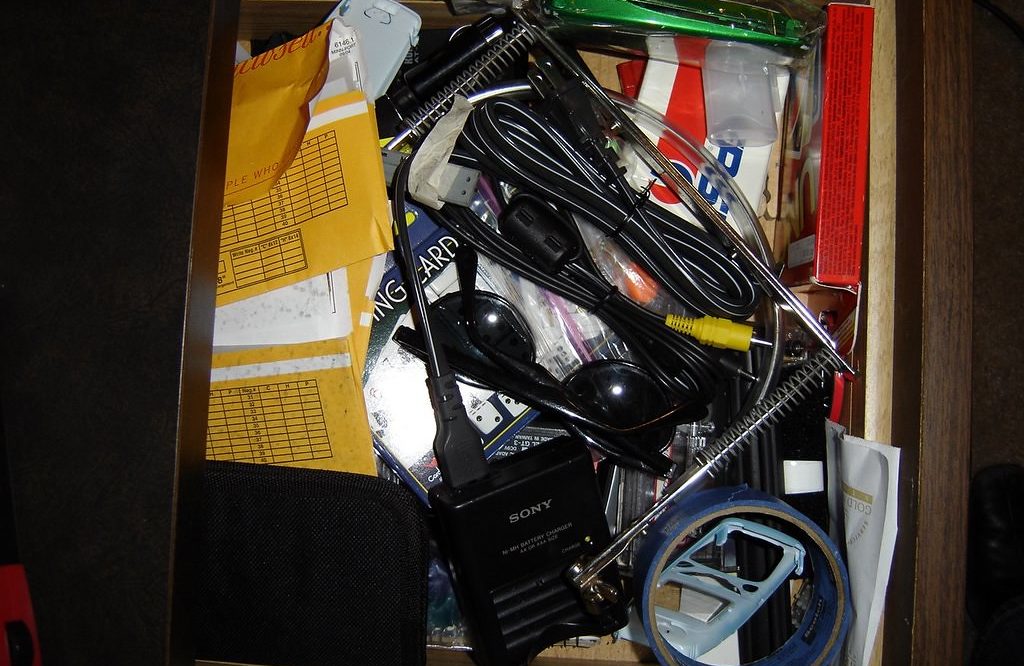 Ah, the universal junk drawer. We all have one.

Sure, maybe yours isn’t a traditional drawer. It could be a closet or a pantry.

Maybe it’s that un-used guest room at the back of the house. Or even a box you keep shoved under your bed in the shadows.

And while some folks may have recently Kondo’d their junk drawers out of existence… you know, because that was a THING for a minute there…  I’m willing to bet they will be returning one day.

Because let’s face it, we all need a spot to toss our bits and bobs. The detritus of daily living needs a home.

Like that stray key. You can’t remember what it goes to, but you can’t bring yourself to throw out either.

Those roving rubber bands you keep finding around the house need a place to live.

And don’t forget the delivery condiments. Your growing collection of soy sauce and ketchup packets need someplace to land too.

Oh, and when an impromptu game of Poker breaks out, you’ll be a hero. Because you can retrieve that pack of playing cards you squirreled away in the junk drawer five years ago.

What’s in YOUR junk drawer?

I’ve seen some pretty impressive junk drawers in my day. And I don’t want to blow my own horn, but my own IS pretty darn impressive.

I mean among other things I have…

But it PALES in comparison to a junk drawer located in the depths of the National Museum of Kenya. (I’ll call in NMK for short).

NMK’s junk drawer is a first place winner… a gold medalist… in the Olympics of Junk Drawers.

And if you think your own can compete, let me assure you that you’re wrong.

Well, not unless you can claim you found a GIGANTIC prehistoric big cat in there, because the NMK sure can.

Paleontologists from Ohio University unearthed the HUGE mammal in one of the museum’s junk drawers. Or at least fossils of the massive carnivore.

The meat-eating mammal was bigger than any ferocious feline strutting around today. In fact, according to the researchers, the animal was more massive than a polar bear. And its skull was as large as a rhinoceros.

It would have lived in what is Eastern Africa today. And 22 MILLION years ago it probably would have spent part of its days scaring the bejebus out of the early monkeys and apes that occupied the same region at the time.

But the fossil record shows this relatives didn’t stay there. They headed north, up into the continents and flourished there too for a long time.

“Big Lion” was the last of his kind

Decades ago researchers discovered the big cat’s fossils while they were looking for evidence of ancient apes in the area. They dug up most of its jaw, portions of its skull, and part of its skeleton.

But it wasn’t what they were looking for at the time. And just like that homeless key or ketchup packet you needed to put someplace the other day, the paleontologists needed to put the fossils somewhere safe but out of the way.

So off the museum’s junk drawer they went. And once there they were promptly forgotten about.

That is until Dr. Nancy Stevens and Dr. Matthew Borths, researchers from Ohio University were doing some Kondoing of their own and rediscovered them.

The supersized kitty was given a befitting supersized name Simbakubwa kutokaafrika.

Simbakubwa is Swahili for “big lion.” And just like it’s namesake today’s African lion, Simbakubwa likely sat perched on top of the food chain of its day.

Their lineage is now extinct. A group of mammals known as , which ruled the roost for the 45 million or so years after land dinosaurs shuffled off this mortal coil (or were washed off it in a HUGE tsunami).

The researchers aren’t positive what finally killed off the hyaenodonts. But the movement towards a drier climate, the emergence of grasslands, and the emergence of new mammals may have all had a role to play.

Simbakubwa’s relatives would have been among the last of the hyaenodonts to roam the earth.

In other words, that was one heck of a junk drawer find.