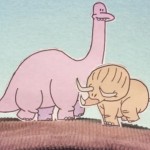 ..and it’s kind of fabulous.

I’ve been on a “I’m on vacation and I’m not turning on a computer” detox for countless days now. (Okay it was like 5 or 6 days I suppose. But let’s face it…in MY world that IS countless.)

At first the symptoms of withdrawal were terrible. The shakes, headaches, directionless listlessness, and overwhelming feelings of dread. But once I had completely detoxed and gotten it all out of my system I was clear-headed enough to wade back in and this is the first thing I ran across today that I wanted to share.

This eyeball-pleasing stop-motion animation was directed by animator Kevin Parry and animated by himself and his team on the project…Carla Veldman and Andrew Wilson.

The team used a new-to-me clever collaboration method of using a blogspot blog to coordinate the work being done on the video. The process has left behind a fascinating glimpse into the entire process of creating the video and a nice archive of how the project progressed from the first early sketches through the finished product.

The video was created to accompany the song it is coupled with here “Thick As Thieves” by Kalle Mattson.