What I want to know is if Whirlpool dreamed up the Robo-Vac back in the 1950’s why the heck did we have to wait so long to get ’em?

Apparently in 1959 Whirlpool had the “Miracle Kitchen of the Future” on display at the American National Exhibition in Moscow.

The pic below (or what I like to refer to as Exhibit Number One) was part of a Look magazine article.

Take a gander. Just LOOK…there is a freakin’ robot vacuum right there! 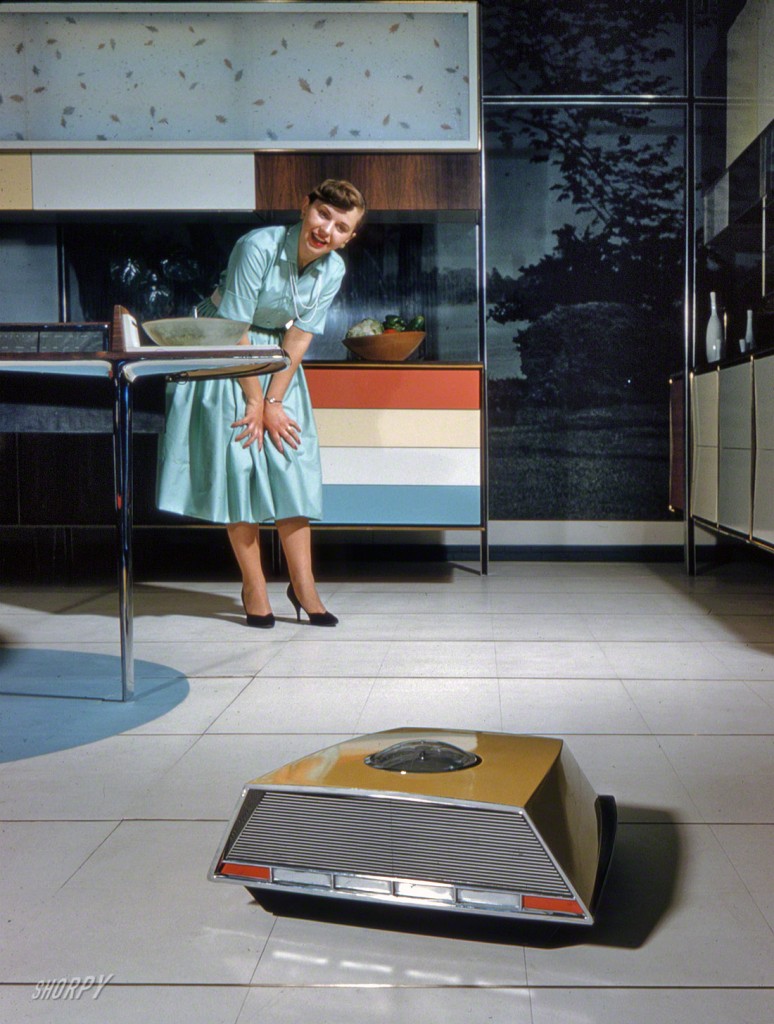 So why did I need to wait to 2002 for iRobot to finally bring me my darn Roomba?

And oh, in case you should doubt me. In case you think I’ve just been doing some clever Photoshopping and I’m making this whole thing up. I did some digging and I present to you Exhibit Number Two… a video!

Oh, and notice the video is from two years BEFORE the Moscow display… 1957!

And while I’m complaining what about all that other STUFF they’re promising me in this little film? I want my dish-scraping self-propelled dish-washing robots and I want them NOW.

I want to be relaxing in MY pushbutton kitchen while my robots whip me up a full dinner and fabulous cake in three minutes flat and then clean up after themselves AND me.

I want to push a button and have a Magical Meal made for me. And I want self cleaning EVERYTHING.

OK, OK… it does appear that they dreamed up a few more cool things that people finally got around to making like CCTV/webcams, what sounds like a microwave oven (10 years before the first in-home models hit), automatic coffee (Keurig anyone?), and even an induction-like surface for cooking.

But still, I can’t help but feel a little cheated.

PS – Does it crack anyone else up that the lighting portion of the black and white film talks about the color changes that are happening?