Behold Earth from about 350 meters up above.

Do yourself a favor and take this one full screen and put on some headphones if you’ve got ’em.

You’re about to embark on a magical trip.

This is a series of time lapsed photos taken from the International Space Station from August to October of this year and then expertly edited by Michael König.

This is not some shopped image trickery or a fancy photorealistic animation. This is the real deal. König carefully smoothed, re-timed, and removed flickering to create this gorgeously smooth couple of minutes of awesome.

He made sure to maintain the images as close to the originals as possible conserving the original color and content. And he gives full credit for the mind-blowing imagery to the photographers Ron Garan, Satoshi Furukawa, and the crews of expeditions 28 and 29. 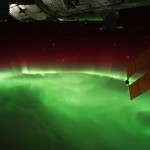 Here’s a list of what you’re going to see on this journey:

Wow, we’ve sure got a beautiful set up here. Sure we manage to screw it up a little bit more each day. But from this height it’s hard to feel anything but hope.