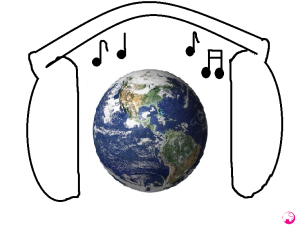 Think there’s no such thing as sound in space?

I’m guessing yes. Which means I’m about to blow your mind. Ready for it?

Right about now you’re probably saying, “But Alice, space is a virtual vacuum. There IS no sound in space.”

And you’d be correct. But what there is in space are electromagnetic vibrations. And those vibrations pulsate in very similar wavelengths to sound.

Depending on how liberal you are with your definition, they could be considered near sound. And if our ears were a bit differently equipped we probably could “hear” those sounds.

I know. Knowing all those sounds are out there waiting to be heard and we can’t hear them sucks.

But there’s no reason to be bummed out because NASA’s got our backs. The brainiacs at the agency created special instruments to record those electromagnetic vibrations or radio waves. And then they transferred those recordings into sounds that we CAN hear.

And, to put it mildly, they’re AMAZING.

They’re every bit as eerie, mysterious, and hauntingly beautiful as you imagine they might be. (And keep in mind that these recordings have not been enhanced or fiddled with, these are the REAL thing!)

Ever wonder what Saturn SOUNDS like? No? Bet you do now. And NASA has made it possible for us to know.

And the sun sounds just as badass as you think it will.

Big beautiful Neptune sometimes sounds like the powerful windstorms that are said to sweep across the giant planet. At other times it strikes me as the sound of waves pounding the shore.

Jupiter reminds of monks chanting or the deep booming sounds of a bass or cello.

But perhaps because I’m a big mushy sentimentalist, the sweetest sound of all is that of our beautiful little blue marble in space, the Earth.

Here’s another in which our gorgeous planet seems to be singing a song for us (goosebumps!).

What to listen to some more NASA radio wave sounds from space? Click here.