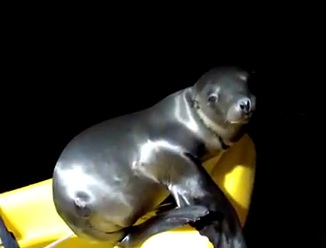 Generally babies are cute regardless of the species.

Nature makes them that way so we don’t toss them out on their itty bitty ears when they turn out to be a pain in the rear.

But some babies max out the cuteness scale. Among those are sea lions.

Rick Coleman found that out first hand when at the end of a night dive he had a surprise visitor.

A sea lion pupster decided to make Rick’s kayak his own and invited himself up to sit a spell.