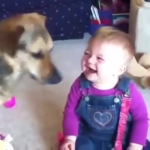 Ok, for the sake of argument let’s just say that I may…MAY, mind you…have posted every single one of the videos that are in this supercut compilation before.

And, I’ll also admit that there could be some slim(ish) possibility that I’ve even posted a very similar compilation before.

Even IF all of that were true… and let’s be clear I’m still not admitting anything… who in the world could blame me? After all, I AM only human.

Babies laughing is one of the best sounds in the universe

And, for the love of all that’s holy, it’s babies LAUGHING at dogs. (BABIES…LAUGHING….DOGS!)

It’s a scientific fact that babies laughing is one of the best sounds in the entire universe.

So, no matter what, if this video doesn’t make you melt at least a little bit…smile at least a tad…and ah hell, I’ll go there…. giggle at least a smidgen then I hate to have to be the one to inform you of this, but your heart my friend, is quite possibly made of stone.

And frankly, if that IS the case, I’m more than a little worried about your soul burning in pits of fire and brimstone for eternity.

And, no, those “Oh babies don’t do it for me” or “Dogs really aren’t my thing” excuses will not cut it here. So I want to see some melting, smiling, and giggling.

[Note: the original babies laughing at dogs video I posted here disappeared. So this is a just-as-adorable replacement.]