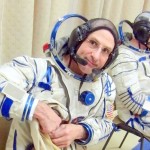 But astronauts that share fun physics experiments in space with us are even cooler.

This video was shot aboard the International Space Station and features Expedition 30 astronaut Don Petit. In it he shows us how in space static electricity makes water droplets literally orbit around a knitting needle.

Awesome eye candy for sure! 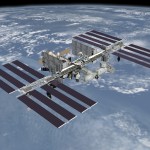 And the fact that one of the personal crew preference items that Petit chose to take with him 240 miles above the Earth’s surface was a set of knitting needles…well that’s some serious Geek cred right there.

Want to know what the best part might be, however? How he says “knittin’ needles.”

I mean…honestly…ADORABLE! Am I right? Or am I right?

You can follow Petit on Twitter. And when you think about it for a moment how mind blowing is that? Tweeting astronauts from space!

(And what a sad commentary that an astronaut who tweets from space…freakin’ SPACE people….has less subscribers to his Twitter stream than a Kardashian. This kids is why they’re taking our space toys away from us.)