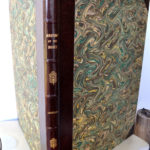 I have a problem. I can’t quit buying books.

That Kondo chick would have a heart attack if she saw the extent of my problem. And it doesn’t help that I married a fellow book addict.

Apparently that’s how much it would cost me to own a beautiful (likely) 1968 copy of Osteographia, or the Anatomy of the Bones.

I found it on eBay. You can see the original listing here.

Osteographia a breakthrough in Anatomical Illustration

The gorgeous Osteographia was first published in London in 1733 by William Cheselden (1688-1752). And it’s considered a breakthrough in anatomical illustration.

There are a couple of things that make Cheselden’s book so unique.

First of all its camera obscura approach to creating the illustrations, which makes it incredibly accurate. And second the use of… well, I’ll just go ahead and say it… whimsical vignettes.

Because it turns out, whimsy and skeletons AREN’T mutually exclusive after all.

And it’s those unusual vignettes in Osteographia, with the animals and people in lifelike poses, that make me NEED this book. I love them so much.

I’ve never seen anything like them before. And neither had folks in day. But unlike ME they didn’t appreciate the beauty and genius of the book.

Genius is seldom rewarded in its lifetime

Because despite Osteographia being considered a landmark now, in its day it was a dismal failure. And Cheselden, a surgeon, likely lost beaucoup bucks on the project.

But it appears it was a true labor of love for him. Cheselden was very actively involved. Rumor has it he even chose the poses for the skeletons himself.

And he was the one that insisted that his artists, Jacob Schijnvoet and Gerard Vandergucht, use the camera obscura method for accuracy.

I owe everything I know about Osteographia to another fantastic post at The Public Domain Review… which I’m also obsessed with.

A few plates from Osteographia for your pleasure…