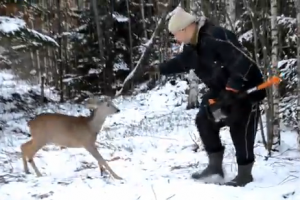 I have no idea what the story is behind this video.

It was posted without any description or real context beyond the date of 1/18/2014 and “Filmavimo vieta Taurage” at the end.

Doing just a bit of Google sleuthing it looks like:

So putting it altogether kids, we have “Filmed on location in Tauragė (Lithuania) on January 18th, 2014.”

Admit it, you’re impressed with my detective-like abilities, right?

But regardless of the context, one thing’s for sure, and that is this deer has MAJOR attitude. Which, you have to admit is a pretty impressive thing for a deer.

Oh, and props to the guy being attacked.

Dude was holding an ax and didn’t even threaten the sweet-woodland-creature-gone-bad with it once. Well done sir. (And your running away at the end? Pure comic genius.)

Brace yourself for “When Bambi attacks.”