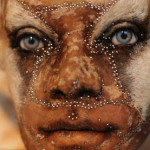 Fair warning… It’s about to get a bit deep and thoughtful up in here.

I recently ran across a short National Geographic documentary, the subject of which has now been rolling around in my brain cage for days now. So I thought it was time to share it.

Kate Clark is a sculpture based in Brooklyn.

Like all “good” art (whatever that is) it’s impossible to not feel some intense emotions when viewing her work. For some it’s wonder or enchantment. For others it’s unease or even outright revulsion. And for others it likely runs the gamut between, sampling from both ends of the spectrum.

Clark combines the ancient art of taxidermy with sculpture in a mash up the blurs the lines been animal and man in an unexpected, and often disconcerting, way. She’s puts human-like faces on the bodies of animals. 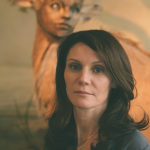 And the results are extraordinary, if unsettling.

Human like faces, with startlingly beautiful eyes, gaze at you from atop beautiful animal bodies, and you FEEL something. Clark’s fusion of the two forces us to consider our shared histories, our interdependencies.

There’s at least an echo of the “uncanny valley” effect here. Even if you’ve never heard the term before, you’ve surely felt it. Coined in 1970 in the book Robots: Fact, Fiction, and Prediction (Jasia Reichardt), the term describes that deeply uncomfortable feeling—a sort of revulsion—that we can feel when features look and move almost, but not exactly, like a natural being.

Clark uses only discarded, rejected and unwanted animal skins in her work. Saving the pelts from the scrap heap, she gives them some sort of a second life with her hybrid creations. This piece of the puzzle seems important to me for some reason. Yet many viewing her work may not ever know it.

Clark’s work is certainly controversial. But powerful art and controversy are seldom strangers.