I often browse through public domain illustrations and film clips looking for little treasures. (Yes I do know I am a geek.) Several months ago I ran across a super sweet set of SciFi illustrations from the early 1950’s. The illustrations were done by Louis Glanzman and were from a couple of books in the Space Cadet series by Cary Rockwell:  “Treachery in Outer Space”,  “Danger In Deep Space” 1953, “The Space Pioneers” 1953, and “Sabotage in Space” 1955

I immediately fell in love with the charming pen and ink illustrations and downloaded them. I tried to dig up a little more information on Glanzman and didn’t originally have much luck.  Turns out it was because I was looking for Louis Glanzman the SciFi illustrator when I should have just been looking for Glanzman the artist. I found a reference that he was better known as a painter and had over 80 TIME magazine covers to his credit. With some more digging I found out that he was in fact quite a successful artist. He was commissioned to do work for the National Geographic Society and even did a series of paintings for Bantam Publishers for the Louis L’Amour series. His paintings appeared in a number of well known national magazines ranging from Reader’s Digest to The New Yorker.

Glanzman was born in 1922 and was a self taught artist. He began his career illustrating comic books and then during the 50’s he illustrated a number of children’s books, like the one the illustrations I had stumbled across were from. Among those children’s books was the very popular Pippi Longstocking series an old favorite of mine.

Which brings me back to those wonderfully kitchy SciFi illustrations of his. I was looking through them again last evening and giggling quite a bit at the expressions on the faces and the outlandish outfits the characters were wearing. It wasn’t long before I was adding silly captions to them.

Below are a couple of my altered favorites. A couple of the illustrations are quite small, just click on each to see a larger version. If you have a better caption than mine be sure to tell me in the comments. 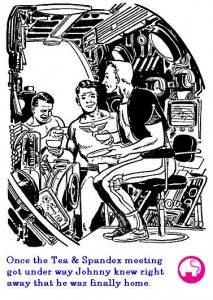