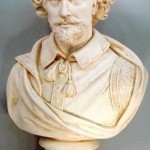 When I was a kid…well, a teenager to be more accurate…we owned a giant bust of William Shakespeare.

William sat on the mantlepiece in the living room for years.

Now, owning a Shakespeare bust would have been cool enough on it’s own. But this was no ordinary bust. It was painted a bright glossy red color.

Occasionally he sported seasonally appropriate accoutrement. Often, he just sat there un-accessorized in all his shiny red glory.

Needless to say, I was quite fond of him.

One day William disappeared. We had been robbed.

Sure, some other things were taken that day. But the only one that really mattered to me was William.

I’ve often wondered over the years since then what kind of market there is out there for glossy red William Shakespeare busts. I mean did William sit for years on some pawn shop shelf gathering dust? Is he still there now?

Occasionally I do a random internet search to see if he pops up online anywhere.

I mean, if I owned a bright red William Shakespeare bust during the internet age I would have written about him and posted his photo online. He might even have his own Tumbler where he visits random points of interest and has his photo taken.

But then again, maybe that’s just me.

Maybe one day William will surface again and we will be reunited…if only on the internet.

A girl can always dream…right?

Update…OMG…UPDATE!: Random surfing brought me to the website of of designers Jimme Karlsson and Martin Nihlmar AKA Jimme Martin. The page featured none other than a bright blue William Shakespeare bust with a red flash.

At first when I saw the pic in Google images I was convinced it was MY Shakespeare with a new paint job. But further investigation revealed that Jimme Martin have done a number of these.

Unfortunately, Blue Shakespeare was already sold. Besides, I never would have been able to afford him anyway when you consider Jimme Martin calls itself an “an established luxury brand…Working with private, commercial and high profile clients.” (Besides shipping from the UK for a bust? ugh)

But hey, it must mean I have good taste…right?