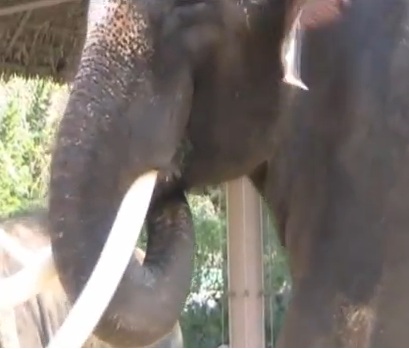 I’m terrifically fond of elephants. I thought I should share that fact just in case you somehow were unaware of it. In fact, if you look closely up there at the address tab you’ll notice that my logo is indeed…yes…an elephant.

So, as an elephant fan it’s pretty much my duty to report on elephant news of interest.

And, well I’ve got a doozy for ya. It turns out that elephants may be able to talk!

Okay, well, to be fair it’s one elephant. And he speaks Korean, which most of us probably don’t understand. And it’s only five words.

But hey, who the heck are you to judge?! You probably don’t even speak a single word of Korean. Well, do you? Yeah, I didn’t think so.

Me either. But, according to those in the know…scientific types and those who DO, in fact, speak Korean…Koshik, a clever male elephant who lives in South Korean Zoo, has invented a unique way of using his trunk in his mouth to mimic the human speech of his caretakers.

In the video below he seems particularly fond of choah which he repeats a number of times. But hey, who can blame him? I mean who doesn’t like to be told they are good from time to time?

Oh, and in case you are doubting the authenticity of Koshik’s unusual ability check out his very own study in Current Biology right here…BAM! Yup, we’re getting all scientific up in here.

Now, of course, there’s a sad aspect to this story…as there so often is when it comes to elephants.

Some of the experts hypothesize that without elephant companionship during his critical growing up years Koshik was likely desperate to bond and be social with someone. So he invented his trunk in mouth move to communicate with his trainers who were his only form of social contact.

I don’t know about you, but that makes me feel very sad.