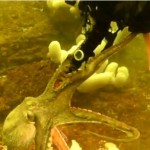 Not new, but new to me…and judging by the views on the video unknown to most…is this pretty darn cool encounter with a Giant Pacific Octopus.

The meeting took place on Diplock Reef in Barkley Sound in British Columbia in the summer of 2010.

The octopus took an interest in one of the divers, Asta. 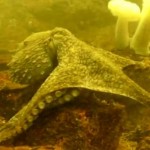 Displaying that well known octopus intelligence and curiosity he gently explores Asta’s arm and the underside of her suit. Then he reaches his arm around her back to feel, taste, and smell more of her.

Apparently Asta got a tad nervous at that point and shook him off. But it was magical to watch up until that point.

Notice that he lost part of one of his arms at some point.

The video was shot by Robert Proy who has a number of other neat underwater videos to watch on his YouTube channel…go check them out here.