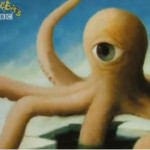 I mean who WOULDN’T want the Doctor to read them a bedtime story?

This apparently happened about two year’s ago, but it’s just surfacing now on YouTube.

Why so long you asK? Who knows…*shrug*. Probably because the BBC hates us Americans or something. (Ha…*knee slap* I kid…I kid.)

Here Tennant reads a story called ‘Miki’ by Stephen Mackey. It was for a show called CBeebies Bedtime Story.

Enjoy it while you can…who knows how long it will be up.